The Strong Rally of Gold and Silver

Gold and silver have surged this week to bring both metals into positive return territory for this year. With a strong follow through to last week’s rally, both metals continue to make higher highs and higher lows, a bullish indicator of a turn in the market as we addressed last week. Gold is trading over $1,180, well above its 50 day moving average of $1,132 and pushing above the 200 day moving average. Silver is well above its 50 day moving average of $15.08 at $16.07 at this writing. On an intraday basis this week, gold reached a 16 week high of $1,191 after the consumer price index reported that prices fell again in September. (Remember that deflation always precedes inflation.) 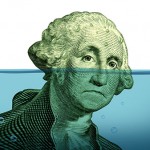 US Treasury Secretary Jack Lew has indicated that the government debt limit will be reached by November 3rd.  The current cash balance of the government is estimated to be approximately $30 billion and as Lew said, “”[W]e do not foresee any reasonable scenario in which it would last for an extended period of time,” If congress does not raise the debt ceiling, the US faces default. Naturally congress will raise the debt ceiling. They have no choice. As US debt continues to grow like a cancer, look for the long term downtrend in the dollar to continue as the Fed prints more dollars, further devaluing the dollar, to service this unsustainable debt monster. Since gold is real money, weakness in the dollar is fundamentally bullish for gold prices and this has been reflected starkly in gold and silver prices in recent weeks. Gold is the best hedge against currency debasement and the erosion of your purchasing power.

INCREASE THE DEBT, DEBASE THE DOLLAR, AND WHAT HAPPENS?

China’s PBoC, and other central banks are selling US Debt at a record pace. According to the Wall Street Journal, “Foreign official net sales of U.S. Treasury debt maturing in at least a year hit $123 billion in the 12 months ended in July, said Torsten Slok, chief international economist at Deutsche Bank Securities, citing Treasury Department data. It was the biggest decline since data started to be collected in 1978.”

CHINA AND THE YUAN GOLD BENCHMARK

The Shanghai Gold Exchange (SGE) continues to make rapid progress toward establishing the SGE as a competitor to London and New York in establishing benchmark gold pricing. The decision by the International Monetary Fund (IMF) regarding whether or not to include the Yuan in the international currency of Special Drawing Rights (SDR) has been pushed from October of this year into the second half of 2016. This may be viewed as a delaying tactic on the part of the US to defend the dollar against the increasingly important Yuan. We may also speculate that this gives China more time to stabilize their economy and stock market, while they continue to be the largest buyer and producer of gold in the world. We have addressed the fact that the accumulation of gold is central to China’s strategy to strengthen the value of the Yuan as an international reserve currency in competition with the dollar. This has profound implications for our standard of living here in the USA as congress and the Fed continue to debase the dollar and China accumulates gold to support the Yuan.

Since China is the second largest economy in the world, it is almost certain, that at some point in the near future the Yuan will be included in the IMF SDR international currency. Your best defense against the loss of the status of the US Dollar is to own gold, period.

Keep your eyes on the prize. We do not own physical gold and silver as a trading vehicle.

There are six primary reasons why investors own gold:

Although the price of gold can be volatile in the short-term, gold has maintained its value over the long-term, serving as a hedge against the erosion of the purchasing power of paper money. Gold is an important part of a diversified investment portfolio because its price increases in response to events that erode the value of traditional paper investments like stocks and bonds.

Gold as an asset will always maintain an intrinsic value. Gold will not get lost in an accounting scandal or a market collapse. Gold’s value does not arise from its usefulness in industrial or consumable applications. It arises from its use and worldwide acceptance as a store of value. Gold is money.