The Discount Rate and Why it Matters to Gold Investors

The Federal reserve is poised to increase the discount rate. This is the interest rate that the Fed charges banks to borrow funds from the Federal Reserve Bank. This discount rate increase will weaken the dollar as the cost of borrowing dollars increases and thereby reduces demand for the dollar.

The dollar has risen in value nearly 20% in the last year and a move of this magnitude is unsustainable. It is both desirable for the economies of the world and a matter of history that currencies tend to remain in a trading range equilibrium. In other words, the dollar must regress to the mean against other currencies after such a dramatic move. As the value of the dollar sinks, gold and silver in dollar terms will rise in price. The chart below shows that every time the discount rate has increased, the dollar has fallen by 10-12% over the next two years. 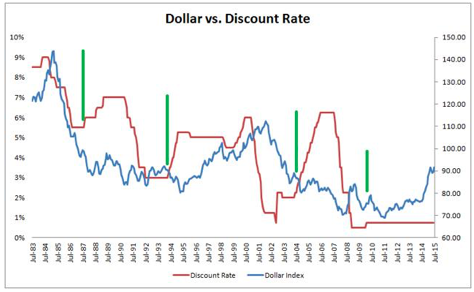 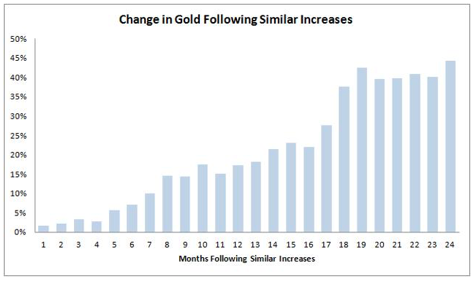 This is good news for gold investors. The chart below shows what happens to the price of gold in every two year period following a rapid increase in dollar strength like the one we have seen in the last twelve months. As you can see, gold prices rose strongly after significant up moves in the dollar like we have just seen. At this point, with gold and silver trading at or below the cost of production currently, would you rather be a buyer or a seller?

Private households in India own about 20,000 tons of gold. This is more than double the official gold reserves of the US government. Demand for gold imports for investment by Indians runs about 300 tons per year. In what the Indian government is claiming to be an effort to reduce the government’s foreign exchange current-account deficit, they will be issuing gold deposit backed bonds that will pay interest on the gold deposited in banks by Indian citizens. The Indian government is speculating that interest payments on private gold holdings will provide incentive for citizens to deposit their gold with the banks. Banks will then be free to sell or hypothecate this gold and thereby increase the supply of gold in the country, while reducing the demand for importation of gold to reduce the current-account forex deficit.

This is reminiscent of the US Executive order 6012, that FDR signed in 1933 which confiscated gold bullion and criminalized the possession of gold bullion by private citizens. EO 6012 provided for a $10,000 fine and up to ten years in prison for violations of the order.

The US then raised the official price of gold from $20.67 to $35 per ounce, devaluing the gold backed dollar by 41%. Put another way, the government increased the value of their gold bullion holdings by 40% after confiscating it from citizens.

What India is trying to accomplish by monetizing gold in this manner is to entice the population to hand over their gold in exchange for the promise of interest payments without paying out for the current value of their gold, while assuming full ownership rights to that gold. That’s even slicker than the deal FDR cut. Most importantly, with governments all over the world scrambling to cure their account deficits, will we see a similar de facto confiscation event here in the US again?

It is worth repeating the words of Martin Armstrong, founder of Princeton Economics from a previous newsletter.

In case you have never heard of Martin Armstrong, he is the founder of Princeton Economics and an internationally famous financial analyst and a consultant to banks and governments worldwide, including the Peoples Bank of China. He does not sell gold or any other product other than his economic research. Here is what Martin said about gold last month:

“I have warned that if you are going to buy gold, make sure it is common date $20, $10, or a $5 gold coin since bullion is going to become a dirty word. As of April 1, 2015, Chase Bank in the U.S. is advising its clients who rent safe deposit boxes that they may not use a safe deposit box to store cash or gold. According to their new policy- “Contents of box: You agree not to store any cash or coins other than those found to have a collectible value.”

In other words, simply storing gold bullion or cash is now considered to be money laundering as you are hiding assets from the government. They will assume it is illegal gains, even if you can prove it is cash or gold you bought after paying taxes. Welcome to the new totalitarian world of government; you are merely a custodian of the government’s total wealth and are seen as their property. You should have gold coins that are collector’s items with common dates rather than modern produced bullion coins.”

Call an expert at Republic Monetary Exchange to learn more about protecting your assets with gold and silver.