After opening the week at $1,164, COMEX spot gold rallied strongly to a three month high of $1,188 gold retraced to $1,141 giving back 48% of the October gains to close the month up 2%. After a strong rally on high volume trading, a short term 48% retracement of gains is to be expected from short term speculative traders taking profits. This week’s silver spot price mirrors the price action in gold- a midweek spike high of $16.32, with a 48% retracement of the October price gains from Monday’s open of $15.83 to Friday’s close at $15.52 closing October up 2%.

From a broader long term perspective, both gold and silver spot prices have hit the 50% Fibonacci retracement to the 1999 low from the highs of 2011. This 50% retracement is a key technical indicator of a market that has found a bottom. This is not the only factor affecting metals prices and as always, we will keep you informed as events unfold.

From 2000 to date, gold has vastly outperformed other financial assets – in spite of having been in a bear market since 2011.

The Fibonacci Retracement Definition from Investopia

A term used in technical analysis that refers to areas of support (price stops going lower) or resistance (price stops going higher). The Fibonacci retracement is the potential retracement of a financial asset’s original move in price. Fibonacci retracements use horizontal lines to indicate areas of support or resistance at the key Fibonacci levels before it continues in the original direction. These levels are created by drawing a trendlinebetween two extreme points and then dividing the vertical distance by the key Fibonacci ratios of 23.6%, 38.2%, 50%, 61.8% and 100%.

BE FOREWARNED- THE “BAIL-IN” IS THE NEW “BAIL-OUT”

We have all heard of “bail outs”. The financial crisis of 2008 brought this term into popular use as the US government had to bail out the “too big to fail” financial institutions like AIG, Citibank, Chase bank and even Goldman Sachs got their pound of flesh from the American taxpayer so that their executives were not forced to suffer a cancelled annual bonus.

The Dodd- Frank Wall Street Reform and Consumer Protection Act, commonly known as the Dodd- Frank bill, effective in 2010 has forbidden the US government from further bail outs of insolvent (failed) financial institutions. Great news, right? The effect of this legislation has been merely to remove the federal government from the process of asset seizure and redistribution. Get ready for a shot of the new reality.

In 2013 the US implemented legislation that will allow insolvent financial institutions to seize your deposits directly. In December 2013 the Federal Reserve in conjunction with the Bank of England issued guidelines and procedures for seizing depositor assets in the event of insolvency. Your bank does not need your permission to implement this seizure. Similar legislation has been put in place by the UK, Canada, New Zealand, Cypress and Germany. This model was tested in Cypress during their financial crisis in 2013. In March, 2013 depositors with over €100,000 had 40% to 60% of their deposits seized and converted to bank capital. This happened overnight on a weekend. It does not matter that your deposits are “insured” by the FDIC. You will not receive a warning.

Government Money Market Funds – Government money market funds would not be subject to the new fees and gates provisions.  However, under the proposed rules, these funds could voluntarily opt into them, if previously disclosed to investors.

The largest money manager in the world, Fidelity has opted in. Be sure to check your prospectus.

Short term market action is not relevant to long term trends. If you think we are not already in  hyperinflation, see the stunning chart below. 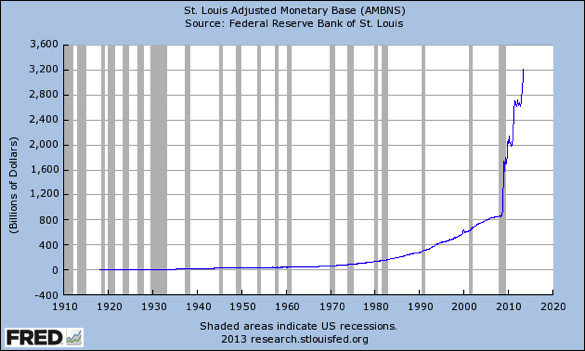 Never, in the history of the United States of America has the dollar been debased so rapidly.

Prices of goods, commodities and interest rates can be suppressed in the short term but the current and ongoing intervention by the Fed- buying treasuries to print more dollars while the Chinese and others are selling US Treasuries by the hundreds of billions of dollars cannot continue indefinitely.  Gold and silver prices must adjust to reflect a lack of confidence in fiat money and therefore government. Look at the chart above again. How is your confidence?

Contact an expert at Republic Monetary Exchange to learn more about protecting your money from inflation and worse.