How Populism Will Be Biggest Driver of Markets in the Future

Ray Dalio, founder of Bridgewater Associates (considered the world’s largest hedge fund), believes that populism will be biggest driver of markets and money in the future. Populism will be even more influential than monetary policy from the Federal Reserve and other central banks. Dalio was speaking at a debate panel with International Monetary Fund chief Christine Lagarde and Harvard professor Larry Summers (among others).

The billionaire hedge fund manager emphatically stated that populism “scares him”. He went on to say that it is now the most important global issue. Populism scares him, in his words, because of its “extremism” (in both the right and left wings) and could lead to attacks against the top 1%. He compared the increasing wealth gap now to the increasing wealth gap in the 1930s. He correlated the rise of populist government and sentiment in the 1930s to that of today. Dalio equated populism to protectionism and nationalism

What this means for investors: Events like Trump’s election, the Brexit referendum, and elections of other populist leaders around the globe prove Dalio’s point. Societies and governments are experiencing a shift away from Establishment norms. That shift is rapidly increasing in pace. Dalio’s fears underly the threat to his elitist position in the finance world from populist disenchantment. There are countless geopolitical unknowns on the horizon that this shift is bringing. These will surely increase demand for safe haven metals. 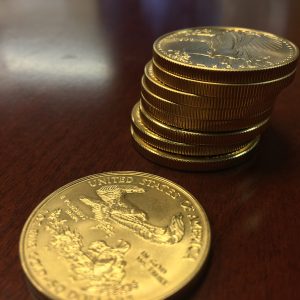 The headline news of the week was, of course, Donald Trump’s inauguration as the 45th President of the United States. The markets and precious metals were both up Friday morning as he took the oath of office and delivered a staunchly patriotic and populist address.

In other news, the global elite ascended to the mountain resort in Davos, Switzerland this past week for the annual World Economic Forum (WEF) discussing macro trends such as how populism will be biggest driver of markets and other macro trends.

Meanwhile gold rallied to a 2-month high breaking over $1,210 this week. Silver experienced a similar boost hitting a 1-month high of $17. Both metals pulled back slightly on Thursday on hawkish comments from Fed chair Janet Yellen.

What this means for investors: Last week we called the price bottom for gold. This sentiment is echoed by other analysts such as Dennis Gartman, who sees positive long-term prospects for gold. Investors are starting to worry about rising inflation under some of Donald Trump’s economic plans for increased spending and tax cuts and avoiding too much risk while increasing precious metals holdings.

On the subject of populism, in a highly anticipated speech Tuesday, U.K. Prime Minister Theresa May stated that the U.K.’s “exit” from the EU will be a “hard Brexit” with Britain leaving the free trade market, which is the foundation of the organization. May also indicated that the final Brexit legislation will go before Parliament to be ratified, which means perhaps the break will not be so severe in the end after all.

May outlined demands for the negotiations that would include an amenable, visa-free solution for British citizens living in the EU and vice versa. She also expressed hope that positive trade agreements could be realized between Britain and its European trading partners. Reaction from Europe was mixed. Some saw it as too “take” and not enough “give” and found it over confident on European concessions.

What this means for investors: The British pound posted its largest gain since 1998 after the speech, while the FTSE 100 index fell (as did the Euro). Many investors had anticipated a downward move from the pound. Instead the markets seemed reassured by the specifics of May’s speech. As Britain prepares to trigger Article 50 and officially commence negotiations, expect more volatility. Precious metals were up Wednesday following the speech.

Davos saw a first this year as President Xi Jinping of China addressed the World Economic Forum. It was the first time the Chinese President has attended, and he gave the keynote address.

In sharp contrast to the overarching question of rising populism that permeated Davos, Xi praised globalization. Without directly naming Trump, Xi criticized the “protectionist” trend towards trade policy that is associated with the new President’s platform.

What this means for investors: China is worried about the approach that the U.S. is turning towards in regard to free trade. Trump’s emphasis on “America first” in regards to domestic manufacturing will weigh heavily on an already sluggish Chinese economy. Overall, the sentiment among the elite in Davos was strongly indicative of unease by the populist departure from the globalization that has empowered them.