FIRST, A WORD FROM JIM GRANT
Jim Grant, publisher of Grant’s Interest Rate Observer (www.grantspub.com) is a 2013 inductee into the Fixed Income Analysts Society Hall of Fame. He is a member of the Council on Foreign Relations and a trustee of the New-York Historical Society. Jim has this to say about gold:
[quote_2 animation=””]

“Gold is an investment in monetary and financial disorder – not a hedge…we are in one of the most radical periods of monetary experimentation in the annals of money…The important thing to recall is why those of us who own it, bought it. What is it about gold that ought to make it appealing – when it seems to be absolutely the thing you don’t want to have.”
[/quote_2]
He added that gold thrives in the face of monetary turmoil, disorder and uncertainty, noting:
[quote_2 animation=””]

“I think we have all three of these things.”…gold, to me, is now the conjunction of price, value and sentiment, and I am very bullish indeed.”
[/quote_2]

LOUISIANA AND BEYOND
In 2011, with House Bill 195, Louisiana outlawed the use of cash for all second hand purchases. HB 195 reads in part, “A secondhand dealer shall not enter into any cash transactions in payment for the purchase of junk or used or secondhand property. Payment shall be made in the form of check, electronic transfers, or money order issued to the seller of the junk or used or secondhand property and made payable to the name and address of the seller.” The Internet recycled this story in April of this year. However, recently, this law was amended to outlaw all cash purchases of gold.
With state and local government debt rising, how long will it be until this contagion to capture and tax all transactions spreads to your state and ultimately to the federal level?

ORDERS FOR PHYSICAL DELIVERY OF COMEX GOLD DOUBLE
To understand gold pricing you must understand the COMEX futures market. This is where the so called “spot” price of gold is determined. There are 124 claims of futures contract (paper) gold against each ounce of physical gold held in COMEX warehouses. Since 99% of these contracts settle in dollars, rather than actual delivery of gold, this 124:1 ratio has not been a problem, until now.
As of Tuesday, demands for delivery of COMEX physical gold stood at a total of 921,500 troy ounces of real physical gold. This is an unprecedented 28.7 tons and again, as in July registered gold for delivery in COMEX warehouses is about 10 tons- less than half of what is demanded. Notable is that the largest deliveries are going to the house accounts of Goldman Sachs and HSBC. (HSBC is the largest bullion bank in the world.) The “barbarous relic” is in greater demand from the wealthiest banks and investment houses and citizens than at any time in history.

JP Morgan has stepped in to bail out COMEX just as they did in July, filling the demand shortfall from their house account. Normally, a company does not take this kind of financial risk to bail out their competitors. Hmm, is JP Morgan acting as a proxy for some larger entity like say the US Federal Reserve to save the COMEX once again? The August demand for delivery of physical gold from COMEX is double what it was in July and has never been higher while COMEX inventory has never been lower! 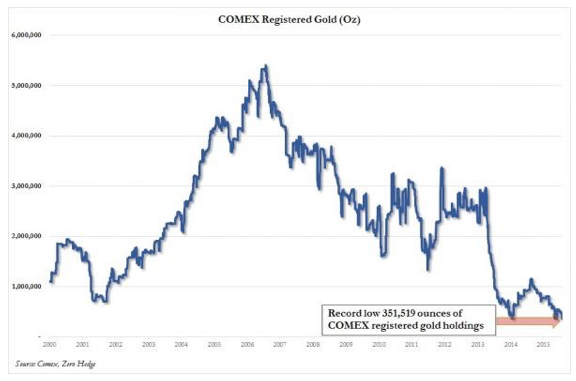 WORLD GOLD SUPPLY
Annual gold production is declining even as demand is reaching historic levels. Total supplies of gold from all sources in 2015 project to be 4,155 tons, 695 tons less than in 2013. Supplies for 2016 are anticipated to be 3,585 tons or 260 tons less than 2015. This year, given demand so far, the shortfall of available supplies conservatively projects to be about 1,350 tons to satisfy market demand. Demand for physical gold at these price levels is likely to continue and most likely increase if prices fall further. The physical gold market is red hot. How long can paper prices keep dropping in the face of shortfalls and unprecedented demand?
Call one of our experts for more information….