History Repeating Itself? Lessons from Hoover on Trade Policy

Lessons from Hoover on Trade Policy: The Smoot-Hawley Tariff Act

As the Trump administration starts enacting new policy, history can illuminate some valuable lessons from Hoover on trade policy and its implications. These implications could have especially relevant repercussions today.

Trade has been an cornerstone of Trump’s campaign. This week he signed an executive order canceling the Trans Pacific Partnership Treaty. Furthermore, with a focus on securing and bringing back U.S. jobs (particularly manufacturing) to our shores, the new President is floating ideas of imposing tariffs on imported goods. This likely would ensure more goods are made and bought domestically rather than abroad.

Yet President Herbert Hoover attempted a similar policy in 1930 with opposite results. He signed the Smoot-Hawley Tariff Act that raised tariffs on over 20,000 goods coming into the U.S. In theory, this was to protect U.S. manufacturing jobs. In reality, U.S. trading partners counter-imposed tariffs on U.S. goods and prices rose deepening the Depression.

What this means for investors: Most economic historians view Smoot-Hawley catastrophic. It ended up hurting a multitude of sectors of the economy including agriculture (to a significant degree) and manufacturing. In the 1930s it prolonged the Depression. Nowadays similar tariffs could stymy the recovery most Americans are expecting.

How Do Tariffs Affect the Economy?

Tariff wars are the result of protectionist policy like the Smoot-Hawley Act. If one country raises tariffs on another, then that country will be forced to raise its prices to maintain revenue. In retaliation – such as what happened in 1930 after Smoot-Hawley – the country now burdened by tariffs will put into place its own tariffs.

Furthermore, tariff wars lead to trade wars. Trade wars can begin in one sector and spill over into others and result in the warring countries’ other partners being affected by higher prices and declining output.

What this means for investors: It seems likely that these kinds of protectionist measures could further inflation. As prices go up, the dollar (or other currency) loses its purchasing power. In a rising inflation environment, gold prices will also go up. Silver would probably also increase in tandem with gold.

This week the Dow Jones hit the important 20,000 milestone. It has been toying with hitting the mark since December, and it finally reached it on Wednesday. Investors are calling this the “Trump Rally” after the market’s run-up following the election. The market, however, had been performing strong for months before after making a remarkable recovery in the fall.

The market hit the 20k mark following news from the White House on trade negotiations and the re-instatement of construction of the Dakota Access Pipeline project. One of the greatest contributors to the milestone though was Goldman Sachs. The Wall Street juggernaut’s bank stock has risen 30% since the election and accounted for more than 20% of the Dow’s rise.

What this means for investors: Some analysts are predicting that a correction is imminent in the markets. Even traditionally bullish analysts are warning that this market is overbought and therefore in an environment ripe for a drop. When the market does drop, demand will likely shift to safe havens such as gold and silver. 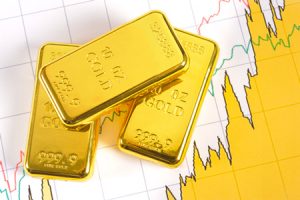 Gold prices pulled back this week dipping below the $1,200 mark. A pull back like this is more or less expected during a week like this with a historic stock market high. In addition the dollar saw some strengthening following some of the Trump executive actions this week.

Precious metals could be set for a rebound though. A report from UBS scaled back investor optimism that has been fueling the Trump rally. Market uncertainty, particularly around fiscal and economic policy, is increasing and this will fuel gold and metals.

What this means for investors: A few weeks ago we called the low for gold prices in 2017. The macro trends that will lift prices are falling into place. These include government spending fueled inflation, protectionism in trade, and deficit spending. Price dips like this are usually an optimal time to hedge against the future with gold or silver.

Lessons from Hoover on Trade Policy: The Smoot-Hawley Tariff Act

How Do Tariffs Affect the Economy?