The Gold Price Has Bottomed

I am going on record today to say that the price of gold has found the bottom. The bull market in gold has begun.

Gold traded down to $1,048 on an intraday basis to close just over $1,055 on Wednesday this past week. The recent decline in the gold price has been a discounting of the much anticipated rate hike of 0.25% on December 16 by the Federal Reserve Bank. FED Chairwoman Janet Yellen has said this week, in essence, that the FED must raise rates so that the FED has more maneuvering room. Most FED analysts have read these statements by the Chairwoman as saying essentially that the FED is raising rates so that they can lower them next year without moving into a negative interest rate policy as the European Central Bank (ECB) has done.  The credibility of the US Federal Reserve Bank is on the line here.

This ECB negative interest rate policy has caused the EURO to weaken significantly against the US Dollar. Support for the dollar is critical to maintaining the status of the USD as the world’s reserve currency and US debt as a safe asset for investment by foreign governments and central banks. On Thursday, the USD sold off 260 basis points in the largest one day decline in memory. Stocks and bonds sold off sharply as well. Yet gold did not rally and closed unchanged. Friday, to close out the week however, gold rose sharply to end up 2.6% on the week, at a close of $1084.10.

MIXED SIGNALS FROM THE PAPER MARKETS AKA THE FINANCIAL CRISIS

Friday saw gold rise $28.65 from the previous day’s close. Stock and bond markets also rallied sharply. In the face of stock and bond market sell offs, followed by sharp rallies, historically sky high volatility in stock, bond and currency markets with increasing rates and a weaker dollar, what is going on here?

I think most of you will agree that we are in uncharted financial waters. Traditionally, there are six primary reasons that investors own gold:

History has shown us that the most important function of gold holdings is protection against geopolitical instability or put another way- own gold as a hedge against the collapse of confidence in government. Ask yourself this simple question- Why is 90% of all the gold ever mined owned by central banks?

Hint: All of the largest banks in existence today have survived two world wars and the collapse of innumerable governments worldwide.

To quote market analyst Russ Winter, “The latest Commitment of Traders [report] is a gold bull’s fantasy come true.” The CoT is the COMEX report disclosing the activity of gold traders who set the gold spot price. The key bullish developments are as follows:

There are extreme bearish readings for gold and extreme bullish readings for the US Dollar. Since abandoning the gold standard, the USD has lost 83% of its purchasing power. The price of gold is determined by market confidence in government run fiat monetary systems. However difficult it may be to quantify in advance the market confidence in the FED ability to engineer a resolution to the current economic crisis and market instability, the chart below tells the story about the value of gold compared to the value of the US Dollar. 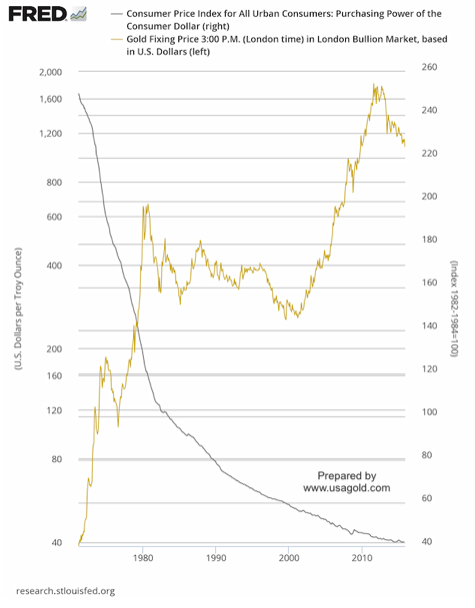 Confidence in government’s ability to manage our monetary system is clearly eroding. When this confidence is lost, it will happen suddenly. The markets are warning us now. Protect your assets with true wealth and contact Republic Monetary Exchange to learn more