“Gold is Money, Everything Else is Credit”

Gold opened the week at $1133 and closed Friday at $1145, up 1% for the week following last week’s 3% rally.  Silver lost a bit on profit taking in the paper market (COMEX) declining from $15.19 to close at $15.09, holding the $15 floor. We are cautiously optimistic that this follow through rally in gold is an indication that gold prices have begun to reflect economic reality and are turning up. Given the instability of the world economies, the (catastrophic) geopolitical situation in sister Europe and the Mid-East, the collapse of the major world stock and bond markets (more below) and the historic level of global demand for physical gold and silver,  we look to be in the early stage of a bull market in gold and silver.

“Gold is Money, everything else is credit”

This quote comes from JP Morgan, one of the most well known financiers in business history. JP knew back then what will always stand true… that gold is the only true form of real money. Having gold as a diversification protects your other investments by creating a form of insurance for your portfolio. This week’s article leads with this quote to remind us all how important it is to have a position in gold. There are currently signals in the economy that tell us gold will be a savior to investors again. There is much to cover this week, so let’s have a look at a some of those signs…

STOCK MARKETS ARE HURTING YOU NOW

If your financial advisor is telling you to hold, be patient, stay the course or any variation of same, consider this:

The stock markets of the ten largest economies in the world are collapsing, wiping out trillions of dollars in investor equity.  Let’s look at the numbers (with a nod to ZeroHedge).

#1 The United States – The Dow Jones Industrial Average is down more than 2000 points since the peak of the market.

#2 China – The Shanghai Composite Index has plummeted nearly 4o% from its high this year.

#4 Germany Down nearly 25% this year and with the looming failure of Deutsche Bank this will get worse.

#6 France – French stocks have declined nearly 18 percent. This welfare state will soon follow Greece into the pit of economic despair.

#8 Italy – Down 15%, soon to follow Greece and France in the months ahead.

#9 India – Down 4000 points, this major exporting nation is severely impacted by the contraction in global trade. 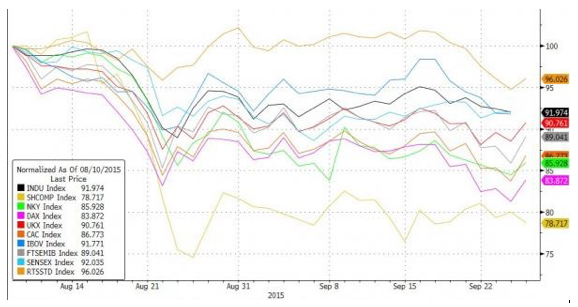 If you have not moved to a substantial cash position with a serious allocation in precious metals to protect your equity, think about it now…

The charts below indicate the investor flight to safety of gold and bonds.

Gold is a store of value with limited supply, does not depend on faith and credit of any government as with fiat currency and it cannot be debased. Ninety per cent of all the gold ever mined on Earth is owned by central banks. Think about it.

THE FED AND THE NIRP

Recent Federal Reserve statements have alluded to the acceptance of, if not inevitability of negative interest rate policy (NIRP). In her speech last week at MIT, Yellen said, “ …severe downturns such as the Great Recession may require pushing real interest rates far below zero for an extended period to restore full employment at a satisfactory pace.”

In other words, you will be paying your bank to store your liquid cash in your accounts.

The Fed cannot raise interest rates without precipitating a systemic economic and governmental failure here in the US.  Here is why. Currently, the US Government debt is 979 times its annual revenue or 979%. This is second only to the failed economy of Japan with a ratio of 2359% For the sake of round numbers, let’s call that a debt to income ratio of 1000:1. That means that if the USG stopped issuing debt today, assuming steady annual revenue, it would take ten years to pay off the existing debt at current interest rates if 100% of the government’s income went to pay the debt!

The only reason the US government has been able to sustain the current debt level is because of current historically low interest rates. The 100 year historical average interest rate on the 10 year Treasury bond is 5%. That rate is 2.18% as of Friday’s close. If the 10 year Treasury rises to the historical average of 5%, this will raise the annual budget deficit to $900 billion per year, or in personal terms, for every family earning over the poverty line in the US, that represents an increase of $700,000 per family. This cannot happen.
Would you rather pay a financially troubled bank to safeguard your cash or store your value in gold?

Germany’s largest bank and the fourth largest bank in the world is dead standing up. Forgive my extreme language, but it is true. Deutsche Bank has by far the largest exposure to interest rate derivatives in the world, sitting on $75 trillion in interest rate swaps. When this bank fails it will take all of Europe with it and this will dwarf the Lehman Brothers crisis of 2008. More on this next week.

Learn how to protect your assets from financial uncertainty and possible chaos and call us at RME for a private consultation.