Gold and silver posted gains for this week thanks to a strong Friday rally in both metals with gold opening the week at $1131 and closing Friday at $1138.50 and silver opening at $14.70 to close Friday at $15.26. Silver was up 5% on the day – the biggest daily jump since Dec 1st 2014 and gold was up over 2% – its best day since April. Most analysts attribute this strong rally to the release of weak jobs data, raising the expectations of QE4 and resulting weakness in the US Dollar. US factory orders in September dropped for the tenth month in a row, adding to the general uncertainty about the “recovery” that apparently exists only in the minds of political speech writers. 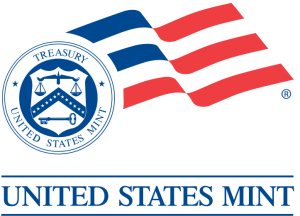 The US Mint shows a 181% surge in gold coin sales quarter over quarter for Q3 and silver coin sales are up 47% month over month at a twenty nine year high. US Mint data shows that gold coin sales have never been higher. The U.S. and Canadian Mints are rationing supply and restricting allocations to wholesale dealers with delayed delivery times. In fact, the US Mint has for the second week in a row, reduced its allocation to dealers since resuming shipments in August after running out of silver coins in July. Many wholesale dealers have sold out their allocations through December.

Much of this demand surge is due to retail demand in the US as investors see these low metals prices as an opportunity to preserve assets and buying power. As gold and silver prices sank to six year lows, this US demand is overwhelming North American dealers and mints causing investors and collectors to look for supplies for coins overseas.

Let’s put this silver coin shortage into perspective. The Sunshine Mint, which provides a large percentage of silver blanks to the US Mint has ramped up its production capacity from 25 million ounces in 2008 to 75-80 million ounces currently. The current silver shortage is taking place while the industry has tripled production capacity since 2008. Additionally, consider this- There has never before been a silver shortage at the wholesale level.

We are seeing rising premiums and delivery delays because of this unprecedented demand and a declining supply of all forms of silver and silver coins. Premiums on silver have been rising since May as you can see in the chart below: 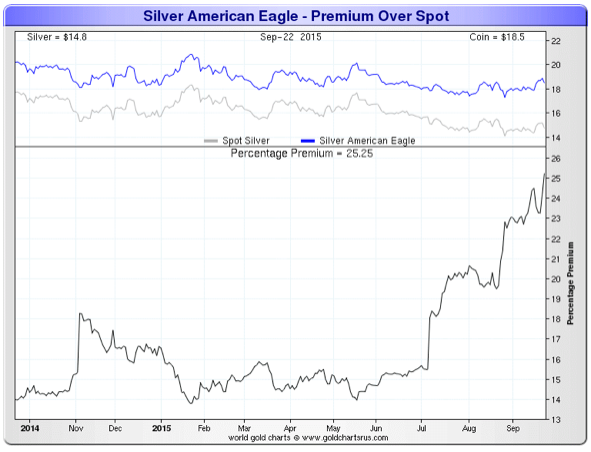 We have not seen premiums rise like this since the financial crisis of 2008 when premiums on silver coins rose over 70%. We are in a similar market environment today as in 2008 with high demand, low prices and rising premiums. Three years later in 2011, silver reached a high London Fix at $48.70 per ounce. Now is the time to buy silver as prices remain low and before the next financial crisis drives prices and premiums higher.

As reported by Reuters, Swiss officials are investigating gold and silver price rigging among several money center banks including UBS, Julius Baer, Deutsche Bank, HSBC, Barclays, Morgan Stanley and Mitsui. In addition to official regulatory probes a number of lawsuits have also been filed in U.S. courts alleging a conspiracy to manipulate precious metals prices. This probe is likely to result in actual proof of wrongdoing as UBS is cooperating with authorities in this investigation. From ZeroHedge-“ ‘As Bloomberg reported earlier “UBS was granted conditional leniency in Swiss antitrust probe of possible manipulation of precious metal prices, a person with knowledge of the matter said… Why would UBS do this? The same reason UBS did so on at least on two prior occasions: the regulators have definitive proof it is involved, and gave it the option to turn evidence and to rat out its cartel peers, or face even more massive financial penalties.’ “

We appear to be on the road to true price discovery in a free market with this investigation into what is the largest gold and silver price rigging scandal in history. This can only be good for gold and silver investors as true supply and demand fundamentals dictated by the physical markets are allowed to determine price, rather than the collusion between the large (bank) players in the paper markets.

As always, we will follow these developments closely and keep you informed. To analyze your portfolio and see what gold can do to help secure it, call us at RME for a private consultation either in our Phoenix offices or by phone at 602-955-6500.