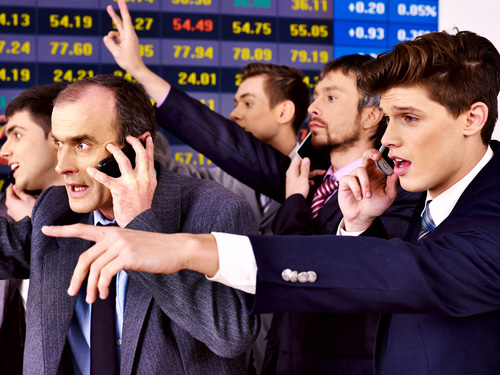 On Friday, the Dow and Nasdaq had their worst day since Brexit. The Dow was down nearly 400 points and had its third worst week overall year to date. An unexpected announcement from the Federal Reserve that hinted at an imminent interest rate hikes was the catalyst. Eric Rosengren – President of the Boston Fed – said Friday that “low interest rates are increasing the chance of overheating the U.S. economy.” He commented that there needs to be a tightening of monetary policy in order to maintain full employment.

In the past several weeks, the stock market has been hitting record highs, so it was a shock to many investors. Gold also took a hit after spot price had been moving up above $1,350 the previous day. European stocks also had a dismal day after the news with their worst day in over a month. The U.S. dollar and short-term government bond yields moved higher.

The European Central Bank announced this week that they would not deviate from their course of stimulus. Mario Draghi encouraged national governments to increase spending, but it is becoming increasingly clear from both the ECB and Federal Reserve that the central banks are out of options on monetary policy.

What this means for investors: Gold also fell Friday, which is not surprising. When interest rates are higher, demand shifts from non-interest yielding assets like gold. If this stock market bubble finally bursts though – which it is dangerously close to doing – investors will start moving back to safe haven assets like gold and silver.

Markets are Frozen by Uncertainty Fears 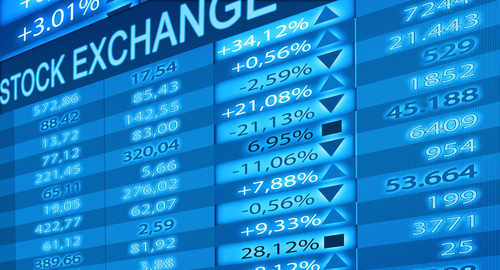 Central banking policies have been at the root of the markets’ gains, and they will be a catalyst for when it crashes. The Fed has been mostly hesitant and vague for the whole year in a climate where the slightest word from a spokesperson shakes the markets. The current state of affairs for the global economy can be summed up by uncertainty – so much so that it is becoming increasingly clear that central bankers are even uncertain what course to take. The features of this uncertainty are:

What this means for investors: Precious metals will be the asset that investors will flee to when the system breaks down. It has happened before, and it can happen again. The banks can only prop up a broken system for so long, and the warning signs are numerous that the world is approaching another brink of economic collapse. 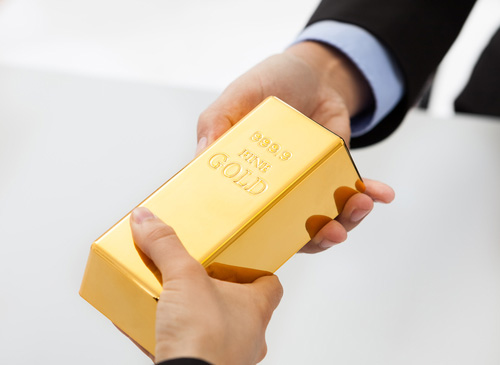 Richard Bernstein, a notoriously anti-gold investor, is buying gold for his clients’ portfolio for the first time over inflation concerns and market uncertainty. When Bernstein – a former investment strategist at Morgan Stanley – taught at New York University’s School of Business, he was notable for telling his students that there was no difference between gold and “wampum,” the glass beads that the Eastern Woodlands tribes of Native Americans used to exchange as currency.

In his opinion, gold was only an asset because of some “romantic value” assigned to it. Just as wampum was only valued because of an agreed upon value, gold only means something because society has decided so. It could easily become nothing more than glass beads one day.

What Bernstein’s analogy is missing however is that gold and silver have been valued as currency by most societies for thousands of years. The example of Native Americans exchanging wampum is representative of a small fraction of human history.

What this means for investors: If Richard Bernstein is seeing enough danger in the markets to buy gold, investors should take note. Another important factor to consider is inflation. Precious metals are an effective way to hedge a portfolio against inflation, which is one of Bernstein’s chief motivations. Gold is also real money. It has been valued for thousands of years, and it does not lose value, unlike paper trades, fiat currency, and “wampum.” 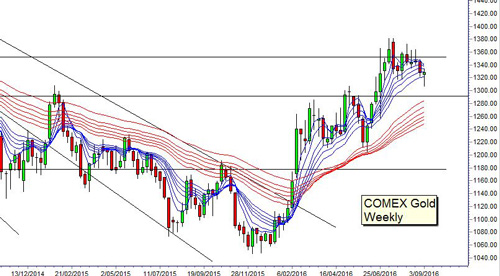 The pull back on gold price Friday presented a prime buying opportunity. This graph illustrates the Comex gold weekly trends for the past couple years. This week gold met resistance at $1,360 and pulled back some.

On the silver side, in last week’s Gold Market Discussion, we looked at why the cheaper metal’s price would continue to run.

What this means for investors: The primary point to take away from this graph is that the current retreat is a lucrative buying opportunity before the uptrend continuation to $1,360 and beyond. Gold is in a new, strong bull market, so any price retreat is a prime opportunity to take advantage.

Massive Stock and Bond Sell Off on Interest Rate Prospect

Markets are Frozen by Uncertainty Fears